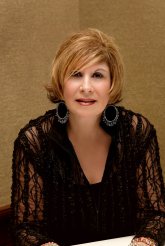 Andrea March has successfully reinvented herself several times as a woman business owner and leader. Co-founding the Women's Leadership Exchange®, she says, is the fulfillment of her destiny, the culmination of all her previous experience, in business and in life.

After selling real estate for some years, she and her husband Sy launched a jewelry import and distribution company, Andrea March Accessories. Andrea, who had always had a passion for jewelry, was the salesperson as well as the designer for this affordable line of costume jewelry! Andrea and Sy ran this multi-million dollar business together for 20 years. In 1995, however, the industry changed, and Sy decided to retire. In her 40s, ambitious and energetic, with her daughter, Kerri, already on her own, Andrea pondered what to do with the rest of her life.

Watching a business program on CNBC one day, she realized she had no idea what they were talking about. Like many others, Andrea says, “I did not understand investing, and was probably not the exception - there were undoubtedly millions of people like me, with money to invest and no understanding of how to make smart decisions.” Thus was born Investment Expo, the company Andrea March founded and ran for the next five years.

Under her guidance Investment Expo became the largest financial strategies trade show/seminar program in the Northeast and South Florida, attracting up to 14,000 attendees annually. Andrea propelled Investment Expo into a first-class seminar business -- one of the leading providers of financial information in the U.S., with 50 seminars conducted by top financial gurus.

Four years later -- in 2001 -- Andrea met Leslie Grossman, who had attended one of her two-day events. The two experienced women business owners shared a powerful commitment to women entrepreneurs like themselves. That commitment became Women's Leadership Exchange®. Andrea and Leslie won the Enterprising Women Advocacy Award in 2005.