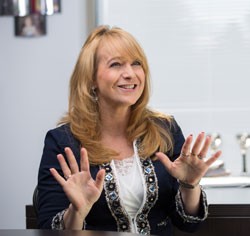 Coulter is a winner of the 2020 Enterprising Women of the Year Award. She is a graduate of Leadership Cary in 2016-2017, and was named the NAWBO-Greater Raleigh Woman Business Owner of the year in 2015-2016, and a Top 50 Entrepreneur by Business Leader Magazine in 2010, to name just a few. The company was also honored with the NAWBO-Greater Raleigh Corporate Sponsor of the Year Award in 2013-2014, among its most recent awards.

Coulter founded the NC Women Business Owners Hall of Fame in 2018 and serves as Chair. She currently serves as Past-President of NAWBO-Greater Raleigh, and she serves on the board as a past-president of North Carolina Executive Roundtable. She serves on Boards of the Defense Alliance of NC, Marbles Kids Museum, the Cary Chamber of Commerce and Second Saturday of Wake County.
https://hummingbird-creative.com/
×
Stay Informed