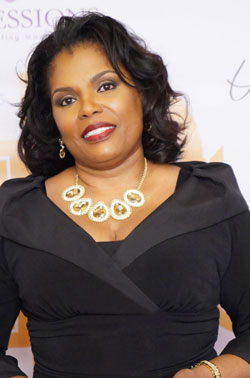 Over the span of 40 years, Carolyn’s accomplishments are: Licensed Cosmetologist/Instructor, Certified NC State Board CEU provider, and a Salon-Spa and Beauty School proprietor. She has employed and mentored over 1500 people, helping many of them start new businesses. In 2000, she entered into a partnership to open the Cameron Village location of Jolie the Day Spa, which grossed a revenue of 1 million dollars the first year.  The collaborative effort resulted in the site being part of a 6-million-dollar acquisition by a Venture Capitalist Group.

Shortly after, Carolyn was diagnosed with Retinitis Pigmentosa (RP), which would eventually cause her to go blind. In 2016, she founded Insightful Visionaries, a 501 (c)3 non-profit, to empower all persons with disabilities.

WRAL recognized her as a role model impacting the community. Carolyn serves on the Mayor’s Committee for Persons with Disabilities, and as an Ambassador for the Foundation Fighting Blindness, was featured in the 2020 National campaign “Stronger Together.” She is also a 2020 inductee to the NC Women Business Owners Hall of Fame.

Carolyn has lost her sight, but not her vision of helping others.