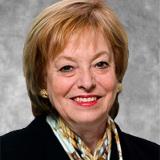 Ms. Kraus founded APCO in 1984 and has transformed it from a company with one small Washington office to a multinational consulting firm in major cities throughout the Americas, Europe, the Middle East, Africa and Asia. In September 2004 Ms. Kraus led a management buy-out of her firm from Grey Global Group, making APCO one of the largest privately owned communication and public affairs firms in the world.

Throughout the years, her approach has been to fuse the best local experience with a global perspective, resulting in an international agency with a unique culture based on seamless teamwork. Ms. Kraus’ achievements have been recognized through a number of prestigious personal and corporate awards, including the Ernst & Young Entrepreneur Of The Year ® in the Services category in Greater Washington (2006), Washington PR Woman of the Year (2006), Lifetime Achievement (PR News, 2005) and PR Professional of the Year (PR Week, 2005). In addition, APCO was named Large PR Firm of the Year (PR News, 2007), Agency of the Year (PR Week, 2006) and European Consultancy of the Year (Public Affairs News, 2005, 2006 and 2007).

Ms. Kraus specializes in providing strategic counsel on issue-based communication, crisis management, market entry and corporate reputation across diverse industry groups. The range of her experience is reflected in APCO’s industry practice groups, which include aviation and aerospace, education, energy, environment, financial services, healthcare, manufacturing, telecommunications and transportation. Ms. Kraus has also pioneered one of the industry’s earliest practices in corporate responsibility and the development of public/private partnerships.

Prior to starting APCO, Ms. Kraus assisted in the creation and development of the Close Up Foundation, a multi-million dollar educational foundation sponsored in part by the United States Congress. Ms. Kraus continues to be involved with the foundation by serving on its board of directors.