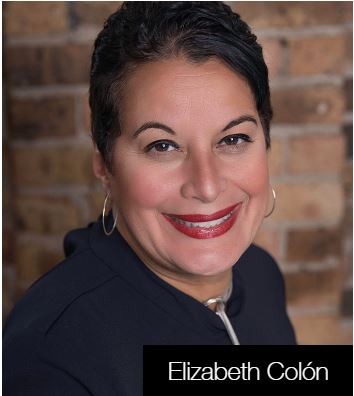 Elizabeth Colón Has Been an Advocate for Women Since Childhood

CHICAGO, July 1, 2020 -- The first Latina president of the National Association of Women Business Owners - Chicago Chapter has been preparing for her new role for decades. The oldest of six children growing up on Chicago’s south side Englewood neighborhood, Elizabeth Colón was an early advocate for women. Her parents immigrated to the United States from Puerto Rico. “Advocating for women began with me advocating for my mother. She did not speak English. I was the interpreter when we would go to the doctors, stores, the bank,” says Colón.

Even at a young age, Colón’s mother would ask her opinion involving difficult and challenging family decisions. “I quickly realized I was the voice for her and my siblings,” she said. “I became a voice for treating people with dignity.”
Colón is president and CEO of Metraphrasis, a national interpreting and translation company with a network of more than 600 linguists. On July 1 she takes on an additional role as president of NAWBO – Chicago Chapter, becoming the first Latina to hold the position in the chapter's 42-year history.

Her theme for the upcoming year is “Together and Stronger.” With a national focus on racial issues, diversity and inclusion, she says, “We have to have the conversation. I faced my own racism in my life. NAWBO is about creating a welcoming environment for all women business owners because that is how we are going to propel each other, grow each other and be stronger together. I have seen that some people believe they can't grow bigger in a room full of different people. But that's not true. Sometimes, you have to be in places where you don't feel comfortable in order to grow."

A board member since 2017, Colón has been impressed with the organization’s commitment to increasing diversity in the chapter and on the board. She will continue that mission during her term. “As a minority representative on the board, I came in with a different set of lenses. Today, when we talk about diversity and inclusion, there’s a growing array of opinions to elevate,” she said.
Colón carries the strength of her mother. “She experienced a lot but was a strong role model by never letting cultural differences get in the way of wanting a better life for her children,” she reminisced. “Together we really are stronger.”