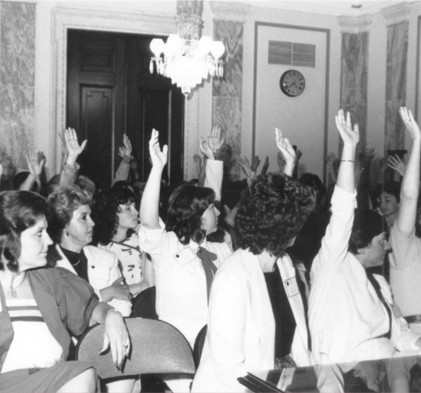 Written by: Dr. Terry Neese, Former NWBC Council Member
WASHINGTON, D.C., October 24, 2018 – The National Women’s Business Council (NWBC) is celebrating the anniversary of the passage of H.R. 5050, the Women’s Business Ownership Act tomorrow, October 25, 2018. The passage of this legislation, and its resulting impact on women business owners, would not have been possible without some incredible, tenacious women that I am fortunate to have worked with. This week, in particular, has me reminiscing on the 1986 White House Conference on Small Business and how that set the stage for HR 5050. For me, on August 16, 1986 the Conference opened a door I didn’t realize was closed. The biggest lesson we learned was that organizing, educating, and cultivating partnerships is paramount.
HR 5050 was historic – it only took 103 days from introduction to passage. On October 25, 1988, President Ronald Reagan signed H.R. 5050, making it the law of the land. This unprecedented piece of legislation gave women business owners in the United States critical resources to build their enterprises and succeed in their respective fields.

To so many women around the country, including myself, H.R. 5050 was not just another piece of legislation. It was the basis on which women gain success in business. So many women start with nothing more than a great idea. It takes an incredible amount of hard work and perseverance to turn an idea into a thriving business. The group of women who strategized, working day and night to advocate for this legislation, made their mark on history, and gave women a path to follow. When you empower a woman to succeed, the nation succeeds – and the incredible women who advocated for H.R. 5050 did just that.

Throughout my career I have had the opportunity to scale my business, Terry Neese Personnel Services, was lucky enough to have been appointed to numerous councils and Boards including NWBC and NAWBO, and founded the Institute for Economic Empowerment of Women (IEEW). Thirty years after the passage of HR5050, I can still tell you that what the 1986 White House Conference on Small Business taught us holds true. Women entrepreneurs don’t want a handout. Like all entrepreneurs, women want a level playing field because they can play and win on any field, at any time. Understanding the barriers to opportunity, whether that is access to capital or access to information and finding strong partners in each other is crucial to success. Thanks to H.R. 5050, women in business have excelled, continually reaching new heights, not only in the United States, but also around the world.

Dr. Terry Neese
Serial entrepreneur Dr. Terry Neese, is a lifelong Oklahoman and has spent over thirty (30) years finding careers for men and women. She is the founder of Terry Neese Personnel Services (TNPS), National Grassroots Network, Women Impacting Public Policy and the Institute for Economic Empowerment of Women (IEEW). Terry’s daughter, Kim Neese, is now the President/Owner of TNPS.

A member of the U.S. Afghan Women’s Council, past national president of the National Association of Women Business Owners (NAWBO), and founder of Terry Neese Personnel Services, Dr. Neese is known as a small business expert and was recognized by Fortune magazine as one of the “Power 30”—the most influential small businesspersons in Washington, D.C. She has been featured throughout several media outlets including MSNBC, FOX News, CNN, SBTV, the Wall Street Journal, the Washington Examiner and the Washington Times.

About National Women’s Business Council
The National Women’s Business Council (NWBC) is a non-partisan federal advisory council created to serve as an independent source of advice and counsel to the President, the Congress, and the Administrator of the U.S. Small Business Administration (SBA) on issues of impact and importance to women business owners, leaders, and entrepreneurs. To learn more about NWBC, visit www.nwbc.gov.