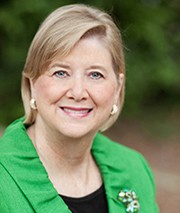 January 7, 2020, Cary, NC – Monica Smiley, publisher and CEO of Enterprising Women, was bestowed the 2019 Entrepreneur of the Year Award at the Million Women Mentors Awards Gala at the Willard Intercontinental Hotel in Washington, DC.

The gala celebration marked the five year anniversary of the Million Women Mentor Program, a program designed to create one million volunteers to mentor girls and young women in the fields of science, technology, engineering and math (STEM). That goal was surpassed ahead of the five-year goal, with more than 2.3 million mentor pledges and 1.7 million established mentor relationships. The organization has now extended its reach to a global initiative,

Monica received her award from Regina Heyward, senior vice president of Wells Fargo, who said, "Monica has proven to be a tireless advocate and mentor for the Million Women Mentor Entrepreneurship Initiative. Since the inception of the program, she has demonstrated an extraordinary commitment and effectiveness as a mentor. Mentees have cited Monica's ability to remain highly involved, steering their course by continuing to pose focused questions. She is willing to provide a push when needed, to dig deeper, set the highest standard, and assist her mentees with staying on track toward success.”
Edie Fraser, co-founder, Million Women Mentors and STEMConnector, and CEO of the Women Business Collaborative (WBC) said, “Monica Smiley has committed her life to building entrepreneurs and recognizing them through her work as Publisher and CEO of Enterprising Women. She has been a strong mentor since the inception of the Million Women Mentor initiative and has utilized her many connections and resources to help the women entrepreneurs in this program scale their businesses. She has extended her mentoring reach through the Enterprising Women Foundation's work with high school girls across the U.S. and Canada by showcasing "STEMpreneurs" – women with STEM-based businesses – in local communities who in turn provide mentorship and inspiration to young women. We are proud to recognize Monica for her leadership."

Million Women Mentors (MWM), an initiative of STEMconnector, is a national and global movement to spark the interest and confidence in women and girls to pursue STEM careers and leadership opportunities through the power of mentoring. Through its network, Million Women Mentors has celebrated over 1 million mentor relationships.


As the editor and publisher of Enterprising Women, Monica Smiley has spent the last 20 years building the national — and now global — magazine she leads into a strong voice for women entrepreneurs. Smiley is also the President and Founder of the Enterprising Women Foundation to mentor and inspire the next generation of women leaders.

Considered a global thought leader on women's entrepreneurship, Smiley is a member of the Women Presidents' Organization, and leads Enterprising Women as a founding coalition partner of Women Impacting Public Policy, a national advocacy organization that represents women business owners before Congress, the White House, and in all 50 state capitols.

Smiley has represented the United States many times as a delegate to the Global Summit of Women around the world with women entrepreneurs, women business leaders, and women Cabinet- or Ministerial-level government leaders from more than 90 countries.

She was the first recipient of the Adrienne Hall Award presented by the Women Presidents' Organization in recognition of her work to support its mission. She received the 2017 National Association of Women Business Owners (NAWBO) Gillian Rudd Business Leadership Award and the 2016 National ATHENA Leadership Award. The International Alliance for Women (TIAW) presented her with the TIAW World of Difference 100 Award in 2010. She received the President's Award in 2011 from Women Impacting Public Policy to recognize her leadership role and the significant impact that Enterprising Women has had on the growth of the women's business community. In 2018 she was named to the Folio: 100 List of Leaders in Magazine Media and the 2015 Folio: “Top Women in Media” List.

Enterprising Women, with headquarters in Cary, North Carolina, is the nation’s only women-owned magazine published exclusively for women business owners that chronicles the growing political, economic and social influence and power of entrepreneurial women. The magazine provides a friendly meeting place, a public forum and a national stage for the critical issues confronting women’s businesses and daily lives from the unique perspectives and experiences of entrepreneurial women. Published in both print and digital editions, the online edition of the magazine reaches one million readers in 185 countries. For more information, please visit http://enterprisingwomen.com or call (919) 362-1551.