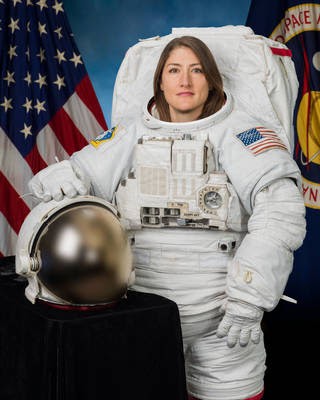 NASA astronaut Christina H. Koch, who holds the record for the longest single spaceflight completed by a woman, is adding another accolade to her extensive list of achievements. As part of a live virtual event co-hosted by analytics leader SAS, Koch will receive the 2020 Global ATHENA Leadership Award. The award, presented by ATHENA International, honors individuals who achieve the highest degree of professional excellence, assist women in reaching their potential, and whose work has made a global impact. Koch will also share her personal journey to becoming an astronaut during the free event Aug. 11 at noon ET.

The Reaching for the Stars webinar is hosted jointly by ATHENA International, a nonprofit that aims to develop women leaders from the classroom to the boardroom, and the SAS Women in Analytics (WIA) network, a community of women who are interested in and advocate for diversity in the analytics field. Together at this event, these organizations aim to honor and celebrate lifelong learning to inspire the next generation of innovative thinkers.

Koch, a North Carolina State University graduate, was selected as an astronaut by NASA in 2013. On Feb. 6, 2020, Koch returned to Earth after spending 328 days in space as a flight engineer on the International Space Station. During this time, she conducted six spacewalks – including the first three all-women spacewalks – and contributed to more than 210 scientific experiments in biology, Earth science, human research, physical sciences and technology development.

“Christina is a stellar example of how one’s leadership journey can thrive through the passion for learning constantly and acting courageously,” said Ann Playter, President of ATHENA International. “She continually aspires to learn, explore and achieve even the most challenging goals. We are proud to present her with this year’s Global ATHENA Leadership Award.”

For women in the analytics field who strive for similar professional excellence, SAS WIA provides an opportunity to network, drive career development and build a personal brand.

“At SAS, the WIA network has built a community of women in analytics who inspire one another to achieve in this male-driven industry,” said Michelle Proctor, Principal Business Operations Specialist at SAS and one of three leaders spearheading the SAS WIA network globally. “We are thrilled to present the opportunity for people around the world to hear Christina’s inspirational story first-hand as she accepts this prestigious and well-deserved award.”

As part of the ATHENA Speaks Student Contest, which encourages young people to embrace curiosity to reach their goals, one middle school student and one high school student will receive a virtual backstage pass to personally ask Koch a question during the live event. Additionally, audience members will be invited to submit questions for an interactive Q&A following Koch’s keynote address.

People of all ages from around the world are invited to join this exclusive live session Aug. 11 at noon ET, or view the content on demand following its premiere.