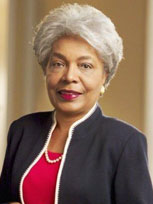 Esther Silver-Parker, President and CEO of the SilverParker Group, a consultancy specializing in corporate responsibility and reputation, stakeholder relationship management, and leadership development, has made advocacy for social change on behalf of minorities and women a lifetime cause and professional calling.

Before opening her firm in 2010, Silver-Parker served as Senior Vice President of Corporate Affairs at Walmart Stores, Inc., where she was charged with the strategic planning and execution of the company’s corporate responsibility, reputation, and relationship management among key national and international stakeholders. She also focused on issues that affect emerging markets and small businesses. Prior to this position, she served as Senior Vice President of Diversity Relations for Walmart and was responsible for the company’s diversity strategy. She was a leader in establishing Walmart’s office of diversity. She developed the company’s first diversity and inclusion strategy, grew supplier diversity procurement by $3 billion dollars, established a corporate external advisory council and developed Walmart’s first stakeholder summit. She is recognized for helping to transform Walmart’s reputation among key stakeholders.

Prior to joining Wal-Mart, Silver-Parker served 28 years in various public relations functions for AT&T, including Vice President of Corporate Affairs and President of the AT&T Foundation. She also directed AT&T’s National Constituency Relations and Issues Management Departments and led the company’s award-winning corporate social responsibility programs, including programs that grew the number of diverse people in such disciplines as engineering, business, arts, and small business. Silver-Parker led AT&T’s public relations field offices in the Northeast, the Mid-Atlantic and Southeast. She designed and implemented the plan to increase AT&T’s presence in local communities in the U.S. and developed the design for AT&T’s field public relations organization worldwide. She also developed AT&T’s first stakeholder relations organizations. She was the recipient of the Catherine Cleary Award, the highest leadership honor AT&T gives to an employee.